A Church of Cannabis Tests Limits of Religious Law in Indiana 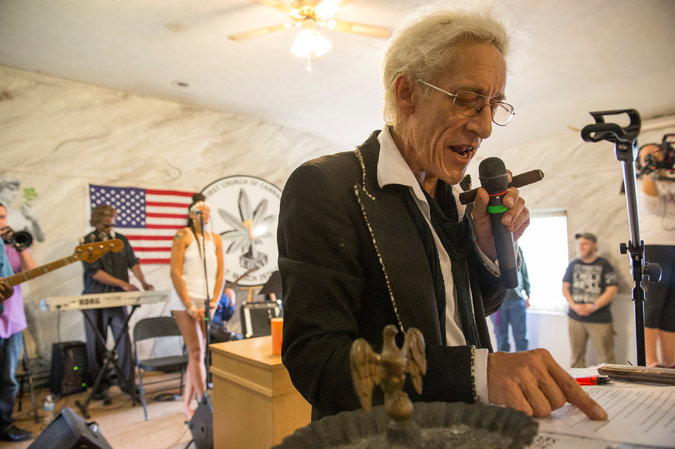 INDIANAPOLIS — On the altar, behind a row of flickering candles, the silhouette outline of a marijuana leaf shined in lights. Colored balloons occasionally bounced through the air as the minister of music led a band in a pew-shaking rendition of “Mary Jane,” the funk tribute to the drug. And Bill Levin, who was introduced as “the Grand Poobah” of this new church, finished the gathering with a simple message: “Light up, folks!”

As legislation that proponents call a religious freedom law took effect in Indiana on Wednesday, Mr. Levin’s First Church of Cannabis held its first service in a quiet neighborhood on this city’s Eastside. Mr. Levin, who is 59 and known around here for his wild puff of white hair, dreamed up the church as a way to test the state’s new, much-debated law: If the law protects religious practices, he figured, how could it not also permit marijuana use — which remains illegal here — as part of a broader spiritual philosophy?

“We will celebrate life’s great adventures,” Mr. Levin said before the service, as clumps of uniformed police officers began gathering outside the newly renovated church, front and back. “This is not just smoking pot and getting high. It’s about the birth of a new religion. I’m a smile harvester.” 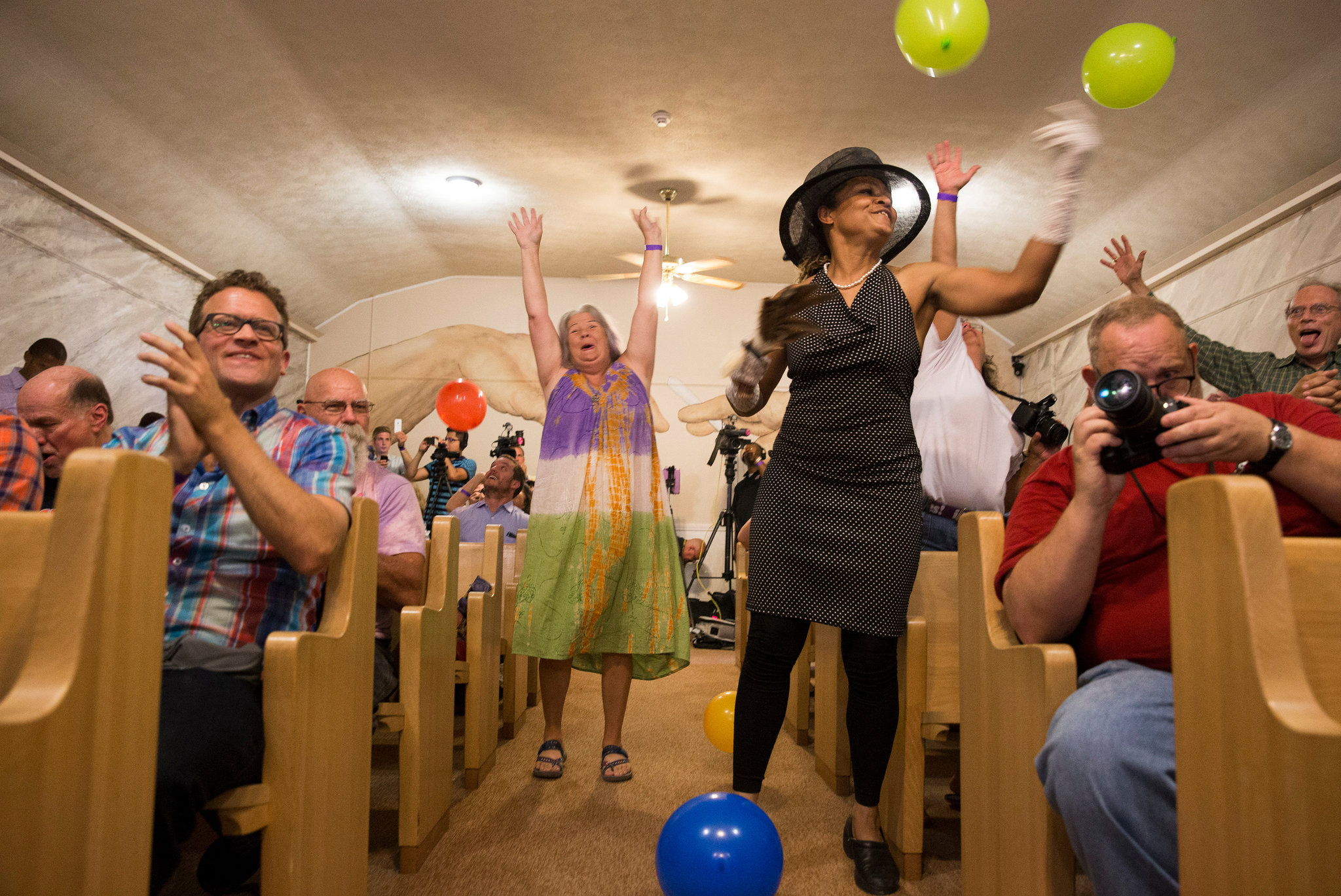 Earlier this year, Indiana’s Republican-held legislature approved a Religious Freedom Restoration Act aimed at preventing government from infringing on religious practices. Critics said the measure was anti-gay and aimed at allowing discrimination against gay men and lesbians in the name of religion. Facing the threat of boycotts and fierce objections from business leaders, state officials swiftly added a provision explicitly blocking the measure from trumping local ordinances that bar discrimination over sexual orientation.

Mr. Levin, who has been a carpenter, a promotions and marketing strategist, and a Libertarian candidate for political office, had few kind words for the lawmakers who wrote the state’s law in the first place. He called them “clowns” who “polluted and embarrassed” his state. But if Indiana was going to have such a law, he said, why not test its limits and press for his long-held goal, permission to use cannabis?

State leaders, including the office of Gov. Mike Pence, a Republican who supported the religious exceptions law, did not respond to requests for comment on the church. And some legal experts said Mr. Levin may have trouble proving that the use of marijuana is truly tied to religious expression. But Mr. Levin seemed untroubled.

“This is an honest-to-God religion,” he said. “Other religions have sins and guilt. We’re going to have a really big love-in.”

Near the church, which Mr. Levin said he bought only weeks ago, some neighbors posted yellow “Caution” tape around their yards to keep people away. A group from a nearby church marched outside with signs in protest. 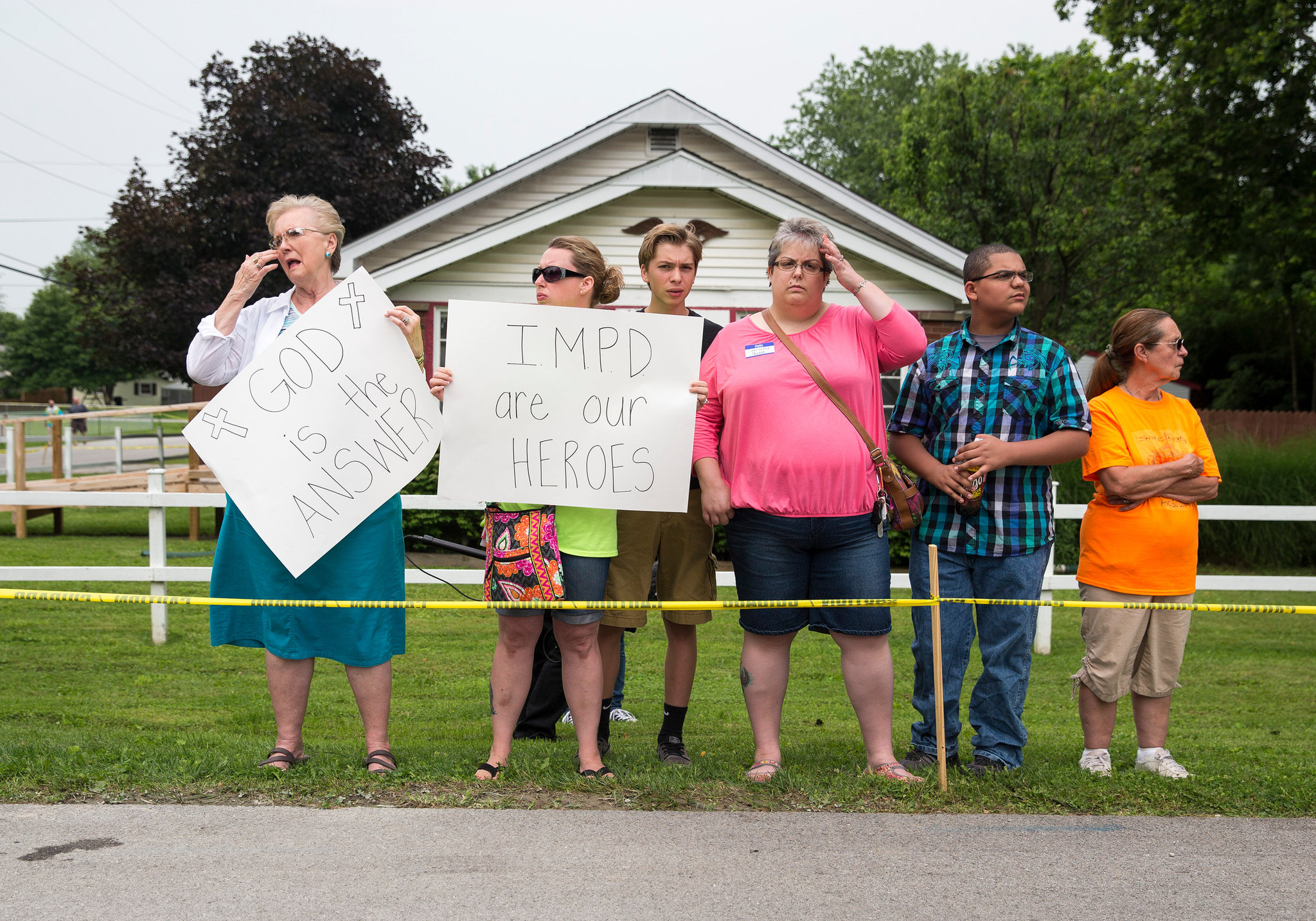 Protesters outside on Wednesday

“What’s next?” Shari Logan, 46, said. “The church of crack? The church of heroin? It’s a mockery to Christians, to God.”

Sarah Taylor, 50 — who watched from her front yard as two food trucks parked outside the church and people in tie-dye gathered — shook her head and drank her coffee. “They’re using religion as a way to legalize their habit,” she said. “If it stands, it’s going to be in your backyard, in your backyard, in all the backyards.”

By Wednesday, though, law enforcement authorities here had made it abundantly clear that they viewed the laws on marijuana as unchanged. Lt. Richard Riddle of the Indianapolis Metropolitan Police declined to say exactly how many officers were at the church, but there were officers outside, posted on nearby corners, behind the church, and riding in pairs on bicycles. And officials announced late last week that anyone smoking marijuana at the First Church of Cannabis’s first service could expect criminal charges. Even observers might be charged, the officials warned, with “visiting a common nuisance.”

So, in the portion of the service when Mr. Levin had planned to pull marijuana from a wooden box and begin smoking it, he did not. Instead, he lit a thick cigar. Some people lit ordinary cigarettes. The legal fight over the religious law needed to be fought in civil court, he said, not in criminal court. The church’s legal advisers, he said, were working on the next steps for getting the legal test they want. “There was a little bit of intimidation about our religious beliefs,” Mr. Levin told the crowded church.

What was left to do, then?

The rest of the service was part dance party, part comedy routine and part heartfelt, personal testimony from those in attendance about the medical use of marijuana. Mr. Levin ordered those assembled to rise and say, “I love you,” five times while looking in different directions. He had the crowd repeat a “Deity Dozen” phrases to live by, including “Do not be a troll on the Internet” and “Grow food.” The police said no arrests were made, and Police Chief Rick Hite described the events as civil and peaceful.

“Enjoy the fellowship,” Mr. Levin called out as he took a drag on his cigar, then started to dance.